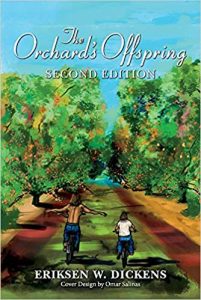 About The Orchard’s Offspring by Eriksen Dickens

In 1965, rural Indiana, teenage brothers, Dave and Roy Herrick mysteriously vanished during the summer. Now, nearly half of a century later, a terminally ill man named Jay Hicks comes forward to finally reveal what really happened to the Herrick brothers.

The elderly Jay Hicks revisits his childhood in Jasper, Indiana as a 14-year-old boy. He introduces his four closest friends at the time, two of which are the rebellious Dave and Roy Herrick, two recently orphaned brothers. Jay elaborates on the summer days the boys shared together at their hideout, a secret location deep within a peach orchard on the outskirts of town.

It appeared to be another ordinary summer for the boys. They swim in the Eulachon River. They ride bikes. They camp out under the stars. But as the summer progresses, the behavior of Dave Herrick becomes increasingly volatile and unstable, leading to an eventual falling out between the group. With Jay on one side and Dave on the other, things become even more strained with the arrival of an enigmatic drifter, whose presence sparks a chain of events that put the boys on a path to a life-altering conclusion.

This Thriller book is available in these Formats: eBook, Print