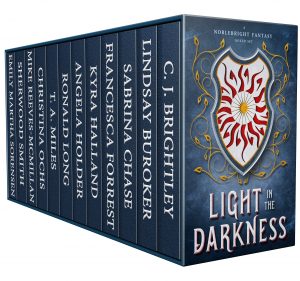 About Light in the Darkness: A Noblebright Fantasy Boxed Set

Noblebright fantasy characters have the courage to risk kindness, honesty, integrity, and love; to fight against their own flaws and the darkness of the world around them; and to find hope in a grim world. Authors included are C. J. Brightley, Lindsay Buroker, Sabrina Chase, Francesca Forrest, Kyra Halland, Angela Holder, Ronald Long, Mike Reeves-McMillan, T. A. Miles, Christina Ochs, Sherwood Smith, Emily Martha Sorensen

This boxed set includes novels by:
C. J. Brightley – The King’s Sword: A disillusioned soldier. A spoiled, untried prince. And a coup that threatens the country they both love.
Lindsay Buroker – The Emperor’s Edge — A law enforcer being hunted for a crime she didn’t commit must work with a cold-hearted assassin to save the only person who can clear her name.
Sabrina Chase – The Last Mage Guardian: Most thought the Mage Guardians simply a myth, but their old enemy knows better–and of their number only one remains to thwart his plan of magical domination and revenge.
Francesca Forrest – Pen Pal: It starts with a message in a bottle and ends with revolution.
Kyra Halland – Beneath the Canyons: A bounty-hunting wizard and a rancher’s daughter with untrained powers must stop a renegade wizard who is tampering with dangerous magic.
Angela Holder – Into the Storm: A massive hurricane will destroy Elathir unless Larine and her fellow wizards sacrifice everything to stop it.
Ronald Long – On the Shores of Irradan: Ealrin Belouve and his friends travel to a new land and face new dangers in search of a tree that may restore magic to one of their own.
Mike Reeves McMillan – Hope and the Patient Man: A talented young mage must overcome a curse to be with the wounded hero who loves her.
T. A. Miles – Six Celestial Swords: The dragon Chaos threatens the magical world of Dryth. Xu Liang sets out on a quest to unite the only six magical blades that can save it.
Christina Ochs – Rise of the Storm: When a renegade priest prophesies an imminent apocalypse, a conflict is sparked which will tip a continent into war.
Sherwood Smith – Lhind the Thief: Lhind enjoys life on the run, taking what she wants, until her secrets are uncovered one by one.
Emily Martha Sorensen – The Keeper and the Rulership: In a world where mathematics and magic are forbidden, Raneh’s growing magic and can’t figure out how to stop.

This Fantasy book is available in these Formats: eBook