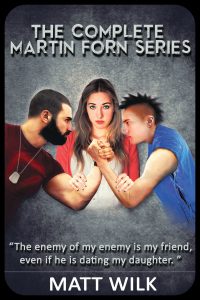 About The Complete Martin Forn Series by Matt Wilk

The Entire Epic of Martin Forn, the Small Town Spy Series, all under One Cover.
The end of an era for one spy leads to the dawning of a new one. Of course, Johnny just had to head-butt that wicked king.
Only in Hollywood do Green Berets avoid having a family. Martin Forn smuggled Clara Puravich out of the collapsing Soviet Union for just that purpose. To him, having the perfect mother for his children was worth the dishonorable discharge. Besides, Interpol wanted him more. Taking turns pulling jobs for the international intelligence community, the Forns made a great team, and a better family. After 2 decades of living in small town Indiana, their old enemies have finally found them. Gregor vies to takeover the Puravich Crime Syndicate, but first, he'll have to go through the Forns. The kidnapping was a mistake. Clara has awaited the day of vengeance for too long. Gregor should have stayed out of Indiana.
With the Forns reactivated, and Interpol scrambling to rebuild the spy network, the next generation will get the chance to prove themselves. Johnny Corn is willing to do whatever it takes to stay on Sara's good side, even if it means working for Interpol.
After the Puravich Crime Syndicate was punished for what they did to the Shawnee, no one dared bring violence to the people of Wenneck County. Until, that is, the Caliphate sent their premier terrorist organization- The Assyrian Plague. The suicide bombers did more than just ruin the Indy 500, they killed thousands of American's on Memorial Day Weekend. Now, the greatest man-hunters in the world are gathering in a small mining town, in the middle of nowhere. For the citizens of Huntington and their neighbors, The Shawnee, there will be no rest until the Assyrian Plague has been eliminated- once and for all.

This Thriller book is available in these Formats: Print